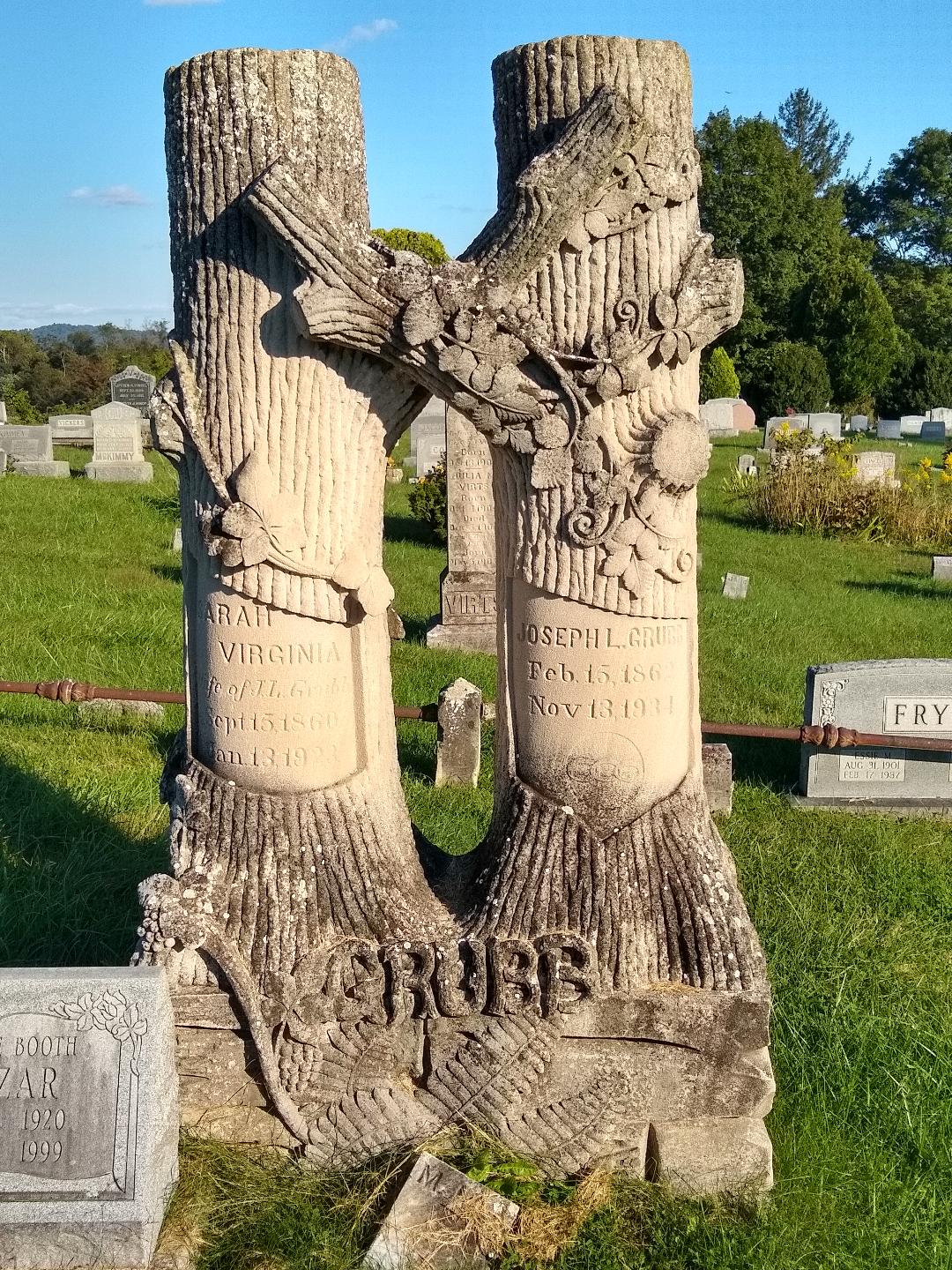 Trees Made of Stone

Many cemeteries contain unusually carved or shaped gravestones, but the markers that look like tree trunks are some of the most unusual.  Called by various names – tree trunk stones, tree stump stones, treestones – they are found in cemeteries throughout the United States, and usually mark burials from the 1880s through the 1930s.

We know of four burials in Lovettsville cemeteries marked with these unique stones.  The earliest is for Christian Nicewaner (or Nicewarner), who died at age 81 or 82 on 10 January 1902.  Christian was a prosperous farmer who married Albina W. McDaniel in 1860.[1]  He kept a diary that spanned the Civil War years and excerpts are included in Yetive Weatherly’s book, Lovettsville: The German Settlement.  He recorded activities and events “as he saw them or lived them,” writing in a straightforward manner and without commentary, even when he was the focus of the entry.  For example, on 1 March 1862, he wrote in his diary, “Federal troops came to our house.  Taken prisoner by Col. Geary.” 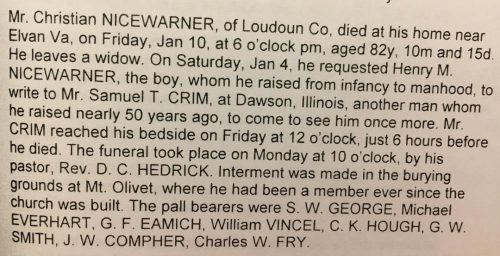 Two notices ran in The Brunswick Herald newspaper after Christian’s death.  A brief announcement was published on Friday, 17 January 1902, announcing: “Mr. Nicewarner, one of Loudoun’s richest men, died at his home near Elvan on Friday evening and was buried at Mt. Olivet on Monday, Rev. D.C. Hedrick officiating.”  A full obituary ran on Friday, 31 January 1902, as shown at left.[2] 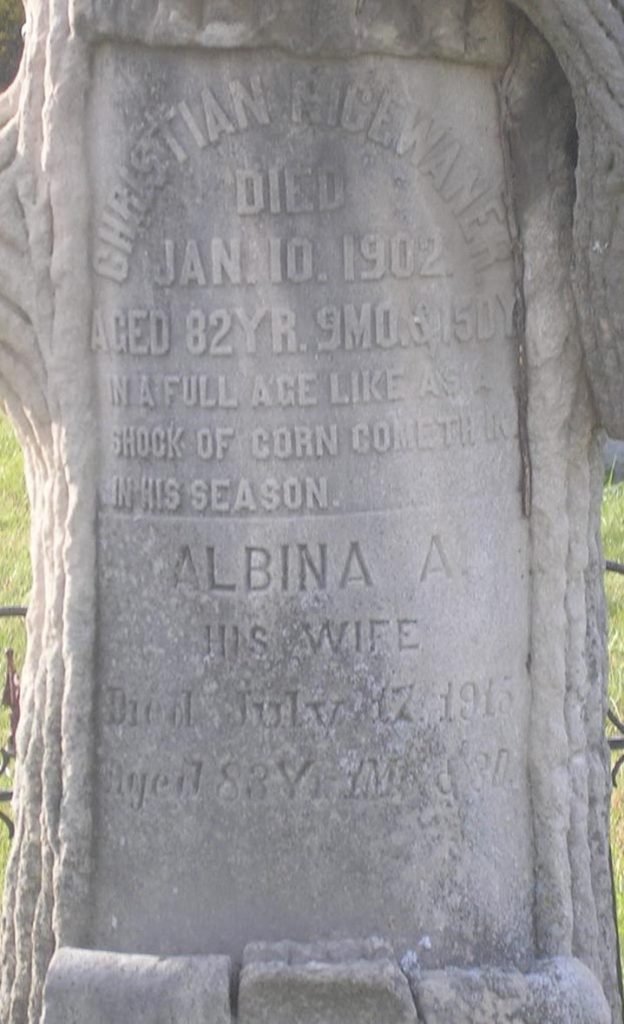 Christian and Albina are buried in Mount Olivet Methodist Cemetery on Mountain Road, with a single treestone marking their grave.[3]  The trunk appears to be “growing” from the ground, and the ferns at its base are believed to represent humility, sincerity, or sorrow.  His inscription is: “In full age like as a shock of corn cometh in his season.”[4]

Their unique memorial was noteworthy enough to generate a small mention in the local Brunswick newspaper on 16 January 1903.[5] 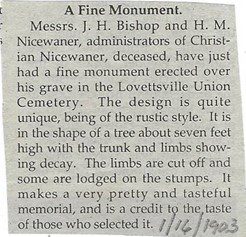 Sometimes the accounts for the deceased’s estate, found in the County Courthouse,  list payments to a company for purchase of a gravestone or payment to a person for engraving the marker.  Unfortunately, none of the estate accounts for the people discussed in this article contains that information.  The only mention of a tombstone was in the estate for Christian Nicewaner, and it was:  “tombstones……$180.” [6]

The other treestones located in Lovettsville are in Union Cemetery next to New Jerusalem Lutheran Church.

Elihu Sheldon Arnold, a farmer, married Elizabeth Mason Miller on 19 February 1881. He and Elizabeth M. Arnold share a single treestone. Elihu died on 22 July 1902 at the age of 48, and his inscription reads, “He was a good man and full of the Holy Ghost.” 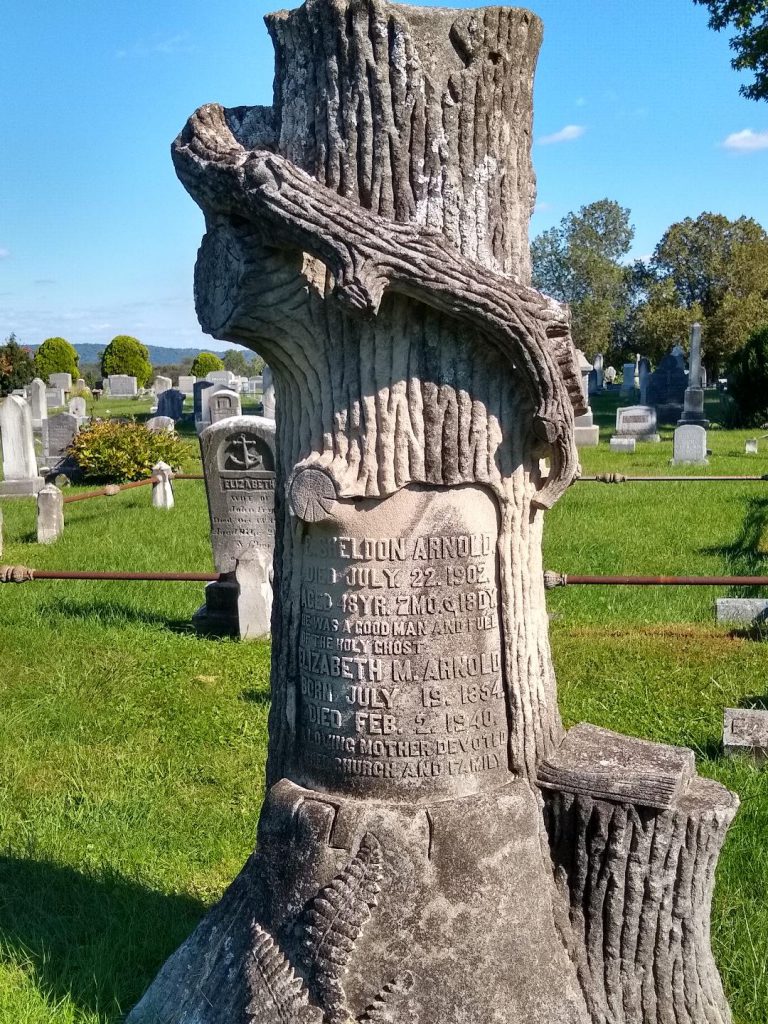 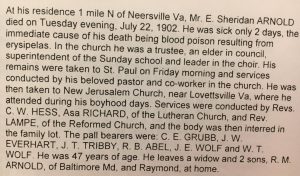 Elizabeth lived another 38 years before her death on 2 February 1940 at age 85. Her inscription reads, “A loving mother devoted to her church and family.” The trunk of their treestone is carved to look like it is growing out of the ground with ferns at its base. A shorter trunk on the side holds an open Bible with the words “Holy Bible” engraved on its pages.

Charlie T. Williams was a farmer who married Sallie Ann Seitz, daughter of Andrew and Amanda Seitz who were documented in an article in last month’s newsletter.  Charlie died in October 1913 and Sallie 26 years later.  Their treestone, like the Arnolds’, appears to be “growing” from the ground and has a shorter trunk on the side with an open Bible and the words “Holy Bible” chiseled on its pages.  The feature of a Bible resting on a short stump, an element of the Arnold stone, too, seems to be unique and could indicate the treestones were made by the same stone cutter.

The only double treestone in Lovettsville Union Cemetery marks the graves of Joseph L. Grubb and his first wife, Sarah Virginia Wire Grubb.  She died in 1923 at the age of 62, and he died in 1934 at age 72.  Interestingly, Joseph’s occupation is recorded in the 1930 Census as marble and granite worker, and a note on his Find-A-Grave record states that he was a stone cutter.  Could he have created or engraved any of these unique gravestones?

The trunk of the Grubb’s treestone rests on a wall of stones with ferns growing in front.  The two crossed branches in front are thought to symbolize the linked arms or embrace of the two deceased.  The linked chain engraved below Joseph’s name could represent his membership in the Independent Order of Odd Fellows.

Several theories exist as to why these grave markers were popular.  As industrialization progressed in the 1800s and infringed upon open and wooded spaces, people became concerned about the loss of trees, wildlife, and natural habitat.  Interest in the outdoors, rusticity, and protection of natural spaces grew.[8]  At the same time, funerary art was in transition, according to Susanne Ridlen, author of Tree-Stump Tombstones.  More modest gravestones were taking the place of grand monuments, and the back-to-nature movement made rustic-looking items popular, including gravestones.  “The customs around death were starting to focus more on the deceased’s life and the people left behind, and a tree proved a powerful symbol of both eternity and humanity, recalling the Bible’s tree of life and tree of knowledge.”[9]

A fraternal organization formed in the late 1800s clearly affected the use and popularity of treestones.  Joseph Cullen Root founded Modern Woodmen of the World in 1882.  After disagreements, he left to found a new fraternal society, Woodmen of the World (WOW), in 1890 in Omaha, Nebraska.  It offered life insurance to its members and in the beginning, a free tombstone.  They created standard designs for both traditional stones and treestones and sent them to local stonecutters for carving.  They later changed their policy to providing $100 toward a tombstone if it had the WOW logo on it.[10]  Woodmen of the World still exists but with a slight name change – Woodmen Life (https://www.woodmenlife.org/).  The company provides insurance and other financial services.

Treestone grave markers were so popular that they were offered for sale by Sears and Roebuck and other mail-order catalog companies.  One could purchase the stone from the catalog and hire a local stonecutter to engrave it.[11] 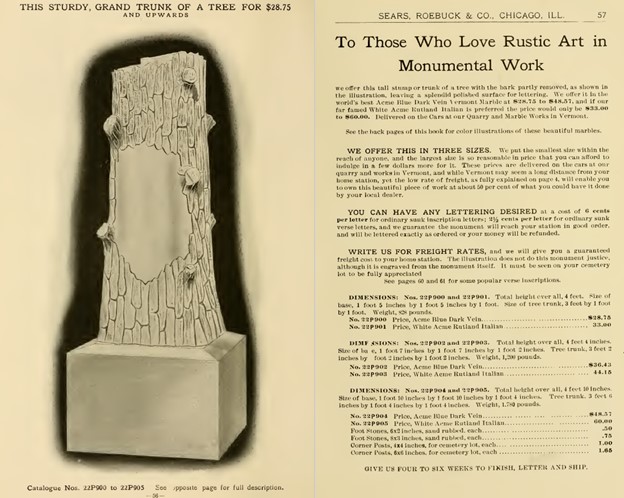 If created by a local stone cutter, the monuments could be customized to include elements relevant to the deceased’s life, such as a train for someone who worked on the railroad or a favorite flower or bird.  This is quite evident in the treestone for John Peterson Beavers, who is buried at Ebenezer Baptist Church Cemetery in Bluemont.  John was the son of Charles Henry Beavers and Sarah Elizabeth Hummer Beavers, and he served in World War I.  He died of pulmonary tuberculosis on 3 October 1919 at the age of 25.[12]   The treestone that marks his grave is highly personalized and pays tribute to his military service.  The inscription reads:

Served with honor in the world war and was wounded in action.

The tree trunk sits on a base of carved, stacked stones.  A hat adorns the top of the trunk, and a canteen rests on the stone base.  The stumps of two large branches extend from the sides of the trunk, possibly indicating a life cut short.[13] 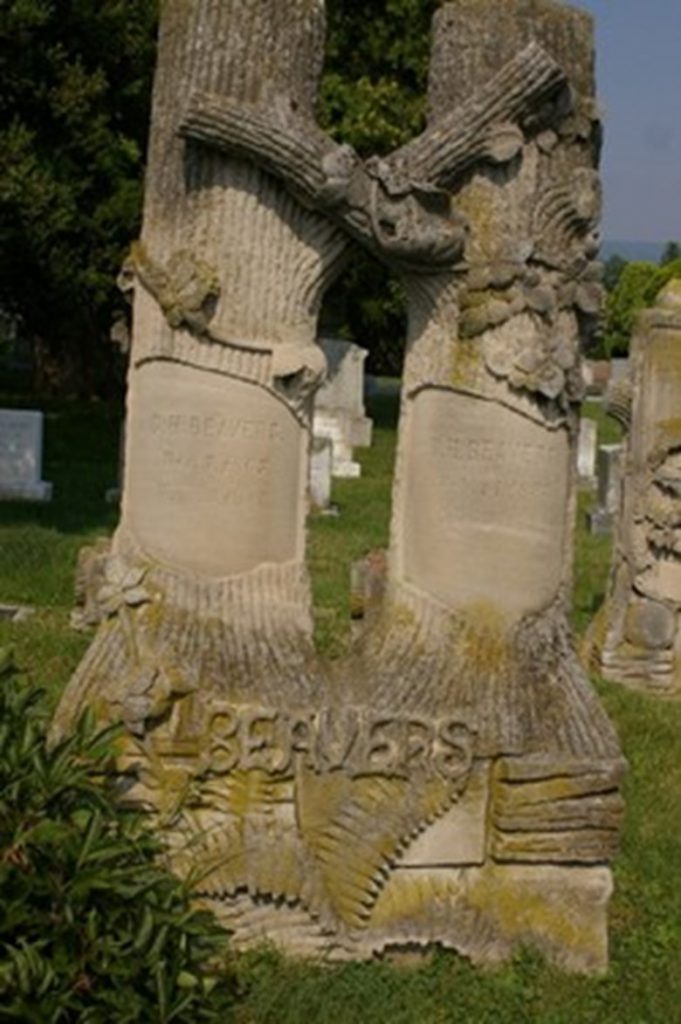 John’s parents outlived him by a little over twenty years.  Charles, a farmer, died in 1940 and Sarah in 1942.  They are buried near their son, and a double treestone marks their grave.

Another double treestone in Loudoun marks the final resting place of Isaac and Eliza A. Ballenger in Lakeview Cemetery, Hamilton.

The interest in incorporating trees into funerary practices continues.  People still plant a live tree in memory of a loved one, and the event is often celebrated with a planting ceremony.  A more back-to-nature approach is provided through the use of living urns.  The deceased’s cremated remains are placed in the living urn along with growing material.  A tree or other plant is placed inside the container or pod, which can be placed in the ground or remain indoors for smaller plants.

[9] Atlas Obscura. “Why Some Gravestones are Shaped Like Tree Stumps.” https://www.atlasobscura.com/articles/why-gravestones-are-shaped-like-tree-stumps