During colonial times, it was common for land tracts to be given colorful names, such as “Tasker’s Chance,” “Arnold’s Delight,” “Mortality,” or “Mill’s Folly” — all of which were in nearby Frederick County, Maryland. “Folly” was often used in land tract names; other Maryland examples include “Browne’s Folly,” Allbreck’s Folly,” and Rhinehart’s Folly.”
So one could be forgiven for thinking that “Folly Lane” was named after someone’s folly. But it’s origin is much more interesting, having been derived from the Fawley family which settled there long ago. And as we’ll see, “Fawley” is but the modern spelling of the old German name which had many variations of “Pfahlÿ.”
In 1989, Loudoun County undertook to rename its roads, because of confusion caused by the numbering system that had been instituted in the 1920s. Local mapmaker Eugene Scheel was invited to sit on the road-naming committee, because he had included old road names on his well-known 1972 map of Loudoun County. In a 2004 Washington Post article, Scheel described how Folly Lane got its modern name:
“Folly Lane, northwest of Taylorstown, gained its name by accident. I recommended to the committee that it be called Wash Fawley Lane, the traditional name. Fawley’s nickname — his real first and middle names were George Washington — was always included in the lane’s name to distinguish him from others of his clan.
“But the lane’s residents, all of whom had moved there since 1980, thought ‘Wash’ a hillbilly name. They agreed to Fawley Lane, but a few didn’t like that either. Someone remarked ‘about the folly of it all,’ and one homeowner chimed in, ‘That’s it.’” 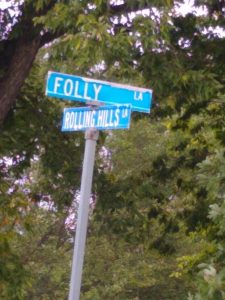 In Scheel’s “Loudoun Discovered” book series, he discusses the roads that take off from the hub at Lindsey’s Corner: “Also leading to the river is Fawley’s Lane, named for farmer ‘Wash’ Fawley’s two farms at its end near the drains of the Quarter Branch. George Washington Fawley was said to have the loudest cattle call in Loudoun. When he yelled for his stock, they said you could hear him in Brunswick, more than a mile away.”
On the famous Yardley Taylor map of 1853, an “H. Fawley” is shown in the Taylorstown-Hoysville area.
Old German church records from this area show many variations of the original Fawley name, and give an idea of how long the family has been here.
In the records of Evangelical Lutheran Church in Frederick (which recorded pastoral acts in Loudoun County prior to 1784-85), we find baptisms for Phale children as early as 1771, and confirmations of three Phale boys in 1783 “in Loudoun County on the Short Hill” – which is how the New Jerusalem congregation was known in the late 18th century.
From the original register at New Jerusalem Lutheran Church, which began as a separate register from its mother church in Frederick around 1784, we find the following variations of the name: Pfalÿ, Pfahle, Pfahly, Pfahlÿ, Phale, Phaley, Phalaÿ, Phaly, Phalÿ, Fahle, Fahlÿ, Fally, and finally, Fawley.
Now, isn’t it easier to call it “Folly Lane,” than “Pfahlÿ Lane”?