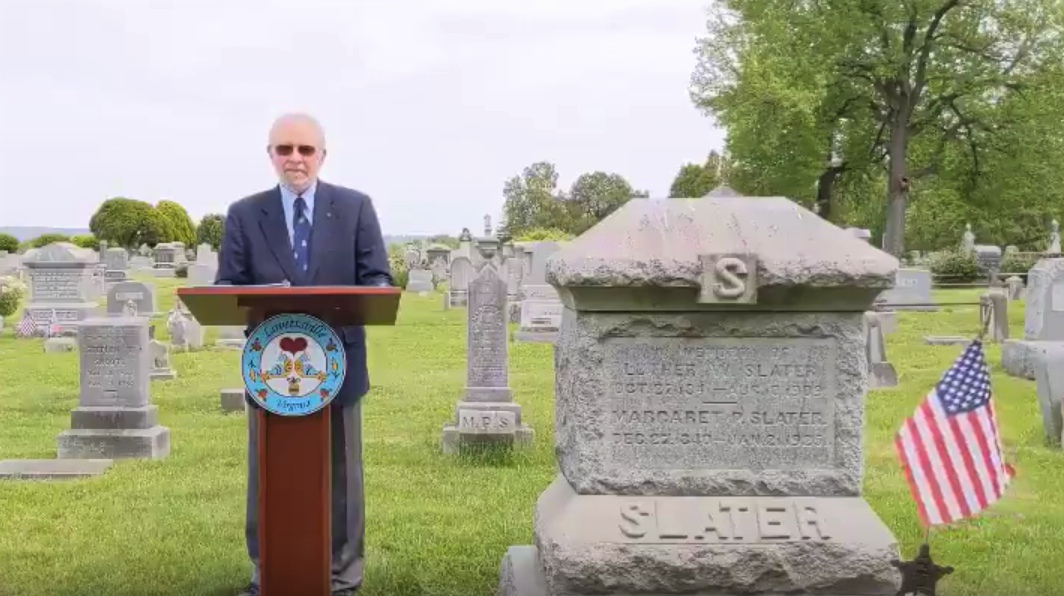 “Why Do We Commemorate Memorial Day?”

Memorial Day remarks by Edward Spannaus, Lovettsville Historical Society, May 25, 2020, delivered as part of the Town of Lovettsville’s virtual Memorial Day Ceremony. The video of the entire event can be viewed here.

I’m speaking to you from Lovettsville Union Cemetery, where 303 military veterans are buried.

Memorial Day – that’s the three-day holiday that marks the beginning of summer, right? – just as Labor Day marks the end of summer.

Memorial Day – a good time  (under normal circumstances) for shopping, and a picnic.

Memorial Day was originally known as “Decoration Day,” and ceremonies were usually held in cemeteries such as this one,  since its purpose was to decorate the gravesites of those who died in the Civil War.  There are many claimants for the first to do this, but many of the contenders were towns in the South.

It is worthwhile noting, in this day and age, that many of those decorating the gravesites, honored both Confederate and Union soldiers – just as we do here today.

The first call for an annual, nationwide observation, was issued by the Commander-in-Chief of the Grand Army of the Republic (GAR — the Union veterans’ association) in early May, 1868.  Gen. John Logan’s proclamation set the date for May 30.

On that date, in 1868, ceremonies were held in 183 cemeteries in 27 states.  5000 people attended the commemoration at A.N.C., during which flowers were placed on both Union and Confederate graves.

The  Decoration Day tradition continued throughout the 19th century, and well into the 20th century. After the First World War, Decoration Day was expanded to honor those who died in all the Nation’s wars, from the Rev War  forward.

One of the nation’s largest Decoration Day Events was held right here, in Lovettsville Union Cemetery.  We are fortunate to have one account of this which has been preserved, from 1898.  It begins this way:

“Decoration Day.  Services in memory of the dead that lie buried in the Union and New Jerusalem Church cemeteries were held at the New Jerusalem Lutheran Church … under the auspices of the Lovettsville Union Cemetery Co.  An ideal day, a beautiful cemetery, a very large attendance, appropriate music, and a profusion of flowers, made the occasion memorable.”

Those annual ceremonies continued up until at least 1950.  Our former Mayor Elaine Walker recalls how she joined the “Flower Girls” dressed in white,  strewing flowers on the graves here.

At Union cemetery, we still put out flags on the graves of over 300 known military veterans every year for Memorial Day.

Last year, the practice of strewing flowers on the graves of military veterans was revived, when the Viking Division of the Navy Sea Cadets Corps, having done this at Arlington National Cemetery, came hereto Union cemetery, after the ceremonies at the Town Square, and lay flowers on military graves here. They were accompanied on bagpipes by Loudoun County Sheriff’s Deputy Sean McCarten.

Unfortunately, this year, the Sea Cadets are under a Stand-down Order due to the Coronavirus pandemic, but we do anticipate them being back here next year.

We urge you to visit our local cemeteries, especially this week when all veterans’ graves are marked with flags.

Right next to us here, behind the church, is the old Lutheran Cemetery, a real hidden treasure in our community. Buried there, are about a dozen Revolutionary War soldiers and patriots. Those whose grave sites are still visible, are marked with flags year ‘round.

There are also at least five War of 1812 veterans, and four Civil War veterans whose grave sites are identified.

At the old Reformed Cemetery (that’s the St. James cemetery on Lovettsville Road), there are nine Civil War veterans, and two World War II veterans, whose graves are also marked for Memorial Day.

Military veterans are also buried at the “African Chapel” (the AME Church) across from the Town Square, and at Mount Olivet United Methodist Church, on Mountain Road.

Since 1971, Memorial Day has been commemorated on a three-day weekend, the last weekend in May, as a result of legislation passed by Congress in 1968 – which was largely for business and commercial reasons.

A number of patriotic organizations, including the VFW, the American Legion, and the Sons of Union Veterans of the Civil War, have urged restoring the date to the fixed date of May 30 – just as Veterans’ Day was restored back to November 11.

In 1999, he stated, when introducing of his bill, that by changing the date, “we have lost sight of the significance of this day to our Nation. Instead of using Memorial Day as a time to honor and reflect on the sacrifices made by Americans in combat, many Americans used the day as a celebration of the beginning of summer….”

His legislation , Senator Inouye stated, “would help restore the recognition our veterans deserve for the sacrifices they have made on behalf of our Nation.”

In that spirit, let us commemorate this day – no matter what the date – and let us never forget those who sacrificed so much for our country.