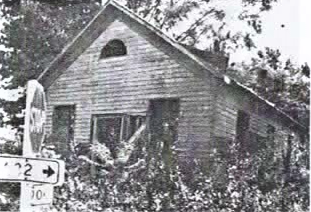 The following reports of activities at Mount Sinai Free Will Baptist Church, located at the intersection of Mountain Road and Britain Road southwest of Lovettsville, were published in the Loudoun Telephone in November and December 1887. The first article tells of a revival and described the progress in almost completing the construction of the church which began in 1886. The second tells us what Christmas celebrations were like at this now-forgotten African-American church. Read more about Mount Sinai Church here and here.

There has been a revival going on for two weeks, at Mt. Sinai Church, under the supervision of Rev. F.P. Lewis.  It has already resulted in the conversion of six souls, and more asking for mercy. Bro. Lewis has received eight for baptism, which will take place on the third Sabbath in this month, at 11 o’clock A.M., a short distance from the church. Bro. Lewis seems to be doing a good work here. Our church is completed excepting the benches, and we shall soon have them.

LEWISVILLE, Va., Dec. 25, ‘’86.—There was a Christmas tree at Mt. Sinai Free Will Baptist Church, on Christmas day, and a meeting of rejoicing all day; and at night, speaking and singing. After that the tree was picked. It contained beautiful presents for the Pastor and his family.  Mrs. F.M. Lewis, the Pastor’s companion, was presented with a handsome bed quilt. There were also nice presents for many others. It was a strange scene in this community. It was the first ever seen by many that were there. It was a day of great pleasure to all that were present. It seemed as if the whole community was changed from drunkenness to sobriety—not only to sobriety, but to christianity.  Bro. F.P. Lewis has been laboring with us for two years, and, thank God, his labor has not been in vain, for the Lord has blest him in all his efforts.  He has been the cause of our membership increasing from twenty to fifty and has by the assistance of God built us a beautiful little church. We all feel greatly indebted to him. May the Lord bless Bro. Lewis and crown him with success.