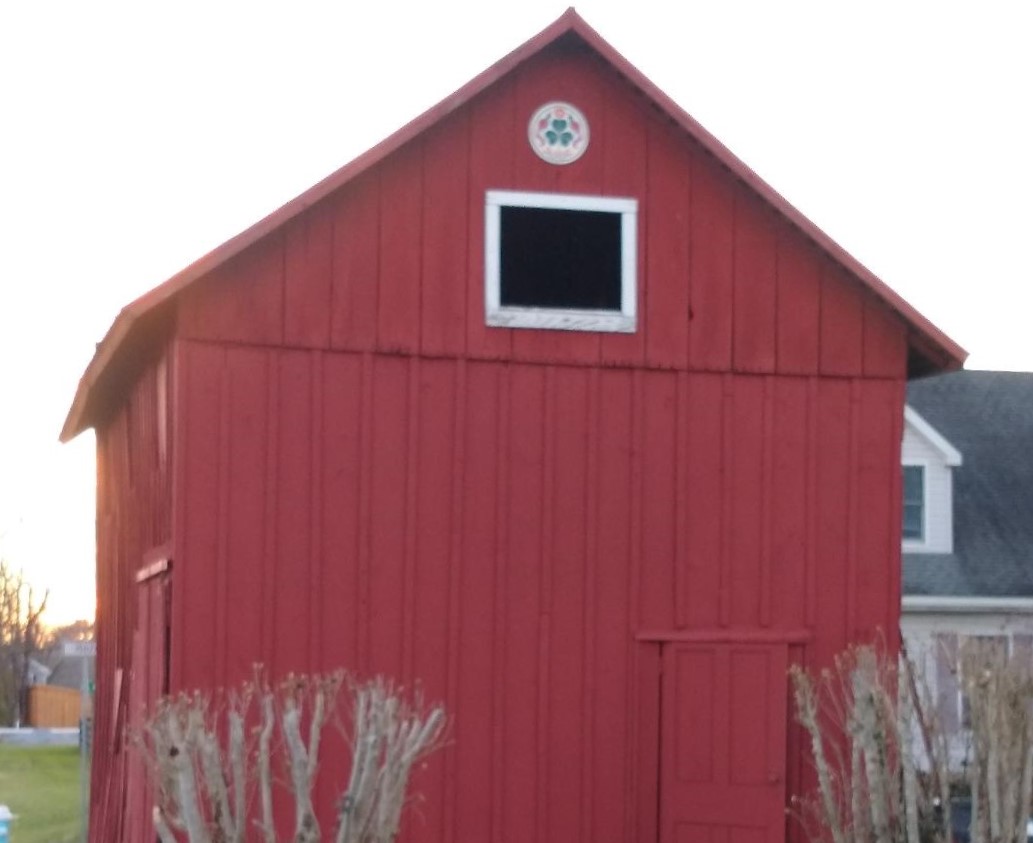 The Luther Potterfield Stable, and The Block That Was Too Big for Itself

Some of you may have noticed the restoration work being done on the red barn at the corner of Locust Street and Pennsylvania Avenue. That structure was once a livery stable which was probably built or rebuilt by Luther H. Potterfield in the late 19th century – although there was already a stable on that site before Potterfield bought the property in 1878. Sometime in the 20th century various sheds were tacked onto it – including chicken coops and an outhouse, which have been removed over recent years by the owner. The recent removal of the shed on the front of the stable restores it to its original footprint.

The structure is referred to as a “landmark” by some old-timers, and it was literally used as a land mark in the court case that was brought by the Freedom (Masonic) Lodge against store-owner Beatrice McClain in 1974. At issue in that case was a five-foot strip of land between the McClain Store (now the Catoctin Bible Church), and the Masonic Lodge (still there).

As is the case with many old deeds, the property descriptions (“metes and bounds”) are hard to pin down today, since they often refer to a tree or a stone which is long gone. In the case of the Trustees of the Freedom Lodge versus Beatrice McClain, surveys were commissioned by both property owners – and both found that the boundary lines for the entire block were too small for the four property tracts contained within it.

What we are calling the Potterfield stable was the only point of reference in the old deeds for the entire block which could still be found in the 1970s. We are referring to the block bounded by South Loudoun Street, East Broad Way, Locust Street, and Pennsylvania Avenue. This is one of the two oldest blocks in the town of Lovettsville; the other is the one on the west side of South Loudoun Street (formerly known as “Pike Street”) running along the south side of Broad Way to Light Street.

When David Lovett divided up the eastern end of his farm into “city lots” in 1820, the first lots sold were four lots on the south side of Broad Way (then called the “Tankerville Line”), with two each on either side of the turnpike. A hotel was opened on the west side of Loudoun Street, and a store on the east side. The German Settlement book says that James and William Hoey opened a store on one of Stevens’ lots in 1823; deed records show the Hoeys buying Lots 11 &12 in 1828.[i]  Those two lots are where the McClain store and the Masonic Lodge were later located.

How to measure an old block

In 1974, both of the surveyors began their measurements at the southeast corner of the ”stable,” as is referenced in many of the old deeds.  At the opposite corner (the northwest corner) of the block, was the old Town well and pump. But that was gone and covered over with a concrete pad by the 1970s.  So, the corner of the stable was all they had.

The Lodge surveyor, Larry Brown, testified in a deposition that he started his survey at the stable at Locust and Pennsylvania, because it was the only point he could find on the ground that was cited in the old deeds. But he said that he wasn’t sure it was the same stable as cited in the deeds. At that point, Dorothy Rollins, the owner of the two properties on the east end of the block, interjected that the stable was hers, and that it was very old. “It belongs to me,” she said, “and it’s been there forever.” She went on to add that it used to be used as a livery stable.

Just how old is the stable?

Surveyor Brown could have been right that the stable he saw in 1974 was not the same as the stable referred to in the old deeds, which indicate that it was already there by 1867. When Tom Bullock, (the former head of the Lovettsville Historical Society, and a contractor who restores old buildings) looked at the stable 10-15 years ago, he dated it to the late 19th century, perhaps around 1890.

So it is very likely that the stable was rebuilt while Luther Potterfield owned the property. This is also indicated by the fact that many of the beams had obviously been previously used, or “re-purposed” as they say these days.

“Throw it into the street”

Surveyor Brown testified that, starting from the stable, and measuring each property along Pennsylvania Avenue, he found that the combined properties were about five feet longer than they were supposed to be, putting the McClain house porch at the corner of Pennsylvania Avenue and South Loudoun Street, out into the street. (The other surveyor, Col. O.B. Knight, also testified that errors in distances were common, and that any error you find, “you throw into the street.”)

Mrs. McClain disagreed with Brown’s survey, so she hired her own surveyor, Col. Knight. Knight also started his survey at the Potterfield stable, but he said that he

had found a stone which he moved and reset at the corner of the stable – which is still there today (photo at right). He did the same thing at the corner of Locust and Broad Way, where he moved a stone a couple of feet to the west. But when he got to the other end of the block, on South Loudoun Street, he seems to have squeezed everything to the east.  He put the Town Well and Pump outside the McClain property, and then moved the boundary line between the McClain property and the Lodge 4-6 feet to the east, and then placed the line between the Rollins property and the old Potterfield property the same distance to the east (which would have pushed the old Potterfield property out into Locust Street.)  And Judge Snead agreed with him.  But that’s a story for another day.

Meanwhile, let’s take another look at the stable.

Board and Batten construction

The exterior walls of the Potterfield stable were built in “board and batten” style – long, wide boards placed vertically, and then narrow pieces of wood nailed over the seams between boards. This was a popular style for barns, and even houses, in the 19th century; it came into common use once that sawmills were accessible and were able to cut boards to uniform sizes. In this case, the boards were 12 feet long (high), and one foot wide.

The best-known board-and-batten building in Lovettsville was probably the old Hammond blacksmith shop, in the corner of Church and Broad Way, north of what is now Andy’s restaurant and east of the old post office (now Brainiacs). In describing this building a quarter-century ago,  Lovettsville historian Dorothy Rickard called it “one of the finest examples of ‘board and batten’ construction remaining in Virginia.”[ii]

Most of the battens on the north side of the Potterfield stable, which were hidden by the shed built onto the front of the stable, had been removed by the owner in recent years, in order to use them to replace others that were exposed and weather-damaged. But fortunately, the owner was able to salvage other battens when the Nicewarner blacksmith shop on Locust Street was torn down a few years ago,[iii] and he used those battens to replace the missing ones on the front of the stable.

The stable now looks similar to what it would have looked like in the 19th century, with the exception of the door opening on the front which was probably cut by Selby Brown in the 1940s or thereabouts. The door is quite low, but the Brown brothers were relatively short in stature, so they didn’t need a six-foot door.

And so, with the rickety old sheds removed, this stable, which “has been there forever,” may, we hope, continue to be there forever.  And so will the errors in measurement made 200 years ago.

[iii] What Was That Building on Lovettsville’s Locust Street?” Lovettsville Historical Society website (see link above).