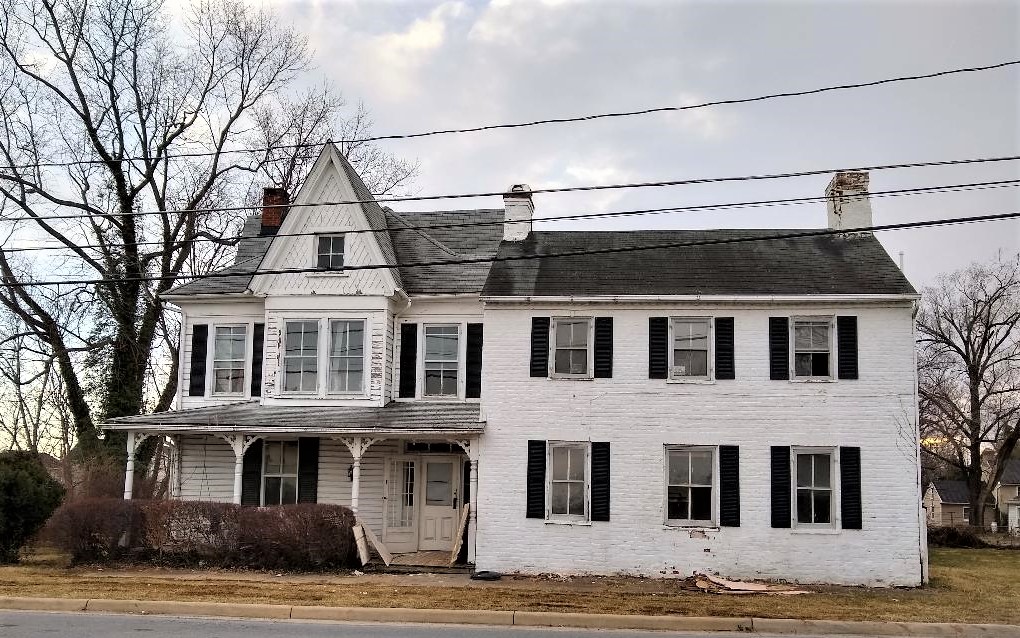 “Doctors’ House” on East Broad Way will be preserved

The “Doctors’ House,” used by three local physicians for their offices from the 1890s to the 1930s, was in danger of being demolished after it was put on the market last year.  Most people familiar with the building thought it would be bulldozed, and a new house – or houses – built on the site.

The property, owned by the Rollins family for the past 80 years, was discussed in our December issue, in the article “The Luther Potterfield Stable and the block that was too big for itself.” The house is one of the oldest in the Old Town section of Lovettsville, and the brick part is believed to have first been built in the 1820s or early 1830s.

Fortunately, Fred Lee George III and Anne DeCourcy George stepped up and purchased the house and lot, and are now stabilizing and renovating the house, which has involved, among other things, tearing out the rotted floor joists and installing new floors throughout the house. (As with all the buildings along this portion of East Broad Way, the crawl spaces tend to flood during heavy rainfall, and the floor joists eventually rot away.)

The Georges have also removed an unstable addition to the original brick structure, used as a narrow hallway and pantry, exposing some of the original unpainted brick.

Dr. Fiske Elgin, who with his wife owned the building and property from 1891 to 1901, and who built the Victorian-style addition on the east side of the older brick house;

Dr. Addison B. Housholder who with his wife Lorena, bought the property from the Rusmiselles for $4500.   Dr. Housholder died in 1936, but Lorena stayed in the house until 1941, when she sold it to Mamie Pearl Rollins for $2700. Dr. Housholder’s medical ledgers were recently discovered while the house was being renovated (see separate article).

We have established that the doctor’s office was located in the older, brick part of the house.  There was a door opening onto the street where the middle window is today. The door can be seen in the old “Main Street” photo, and it is also evidenced by the irregular brick work seen from inside.

Between 1821 and 1836, and even after, the chain of title has confused everyone who has looked at it.  Sometime in that time period,  James and William Hoey acquired the property from William Wire.  (The Hoeys purchased a number of lots in the town at this time.)

In 1838, Peter and Mary Wire appear to have sold the house and lot to John Eamich.

Luther Potterfield  and Kate Eamich were married in 1871, and in 1878, they bought the property next door. By this time, or shortly thereafter, the store was known as “Eamich and Potterfield,” and it was the largest general store in Loudoun County.

In 1891, Frederick Eamich died, and his family quickly sold the house to Sallie Elgin (and Dr. Fisk Elgin too, it would seem).

In 1902 or around that time, Fisk and Sallie Elgin, or a trustee, sold the property to Dr. Arthur W. Rusmiselle.

In 1941, Leona Housholder, the widow of Dr. Housholder, sold the property to Mamie Pearl Rollins, and it remained in the Rollins/Brawner family for 80 years, until being sold in 2021.

For more on these doctors, see article on Lovettsville’s Doctors.