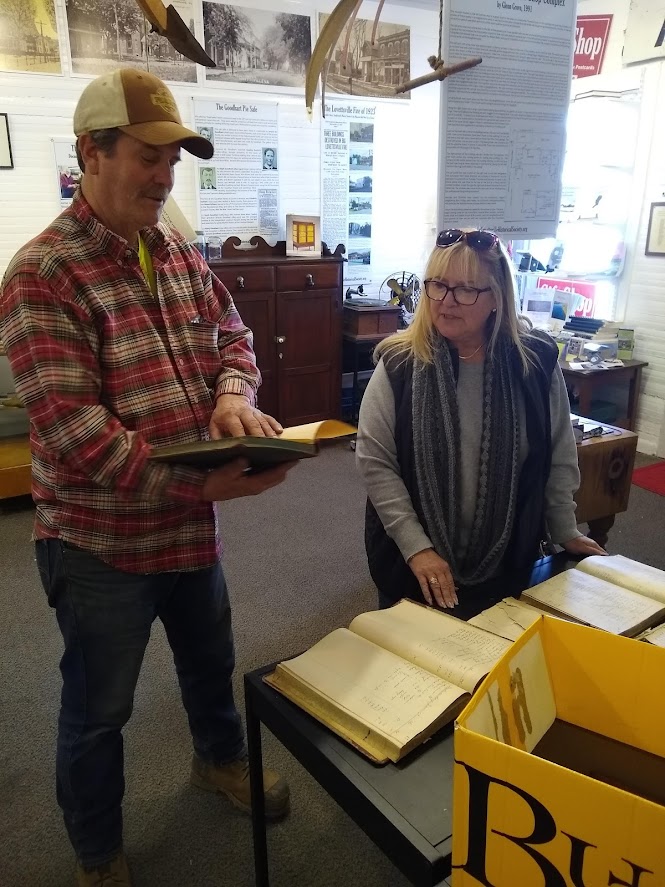 Physician ledgers from the 1920s and 1930s were recently found during the renovation of the Rollins house at 30 East Broad Way, which is being carried out by Fred Lee George III and Anne DeCourcy George.

The ledgers and journals, found under floorboards in the attic, were apparently compiled by Dr. Addison B. Housholder (1870-1936), who had his medical practice in that house from 1920 until his death in 1936. The ledgers contain the names of patients and the fees charged to them. For most entries, there is no indication of what the patient was being treated for.

The Housholder ledgers will be added to the Lovettsville Museum’s collection of ledgers and other items from local doctors’ practices.

The other major collection of medical items in the Museum is from the estate of Dr. William B. Carpenter (1905-1975), who attended Lynchburg College and the University of Virginia. He practiced medicine here starting in 1933, with his office at 38 East Broad Way, and also had an office in Brunswick. Later he lived and worked out of the St. James parsonage.  When Bernard Spring closed his store at 40 South Loudoun Street during World War II, Dr. Carpenter and his wife Eileen bought that property and the house next door, where they built an addition and set up his offices.  He continued the practice of medicine until 1964 and died in 1975. He was the last permanent resident doctor here for the rest of the 20th century.  Dr. and Mrs. Carpenter are buried at Lovettsville Union Cemetery.

Here’s a roster of Lovettsville’s doctors through the 19th and 20th centuries, as far as we know it at this point:

Dr. John C. Bush (_ – 1893) graduated from the University of Maryland Medical School in 1854, and came to Lovettsville to set up a practice. He married Mary E. Slater (a sister of Lt. Luther Slater) in 1856. He had a thriving practice at the outbreak of the Civil War. He had a letter from Jefferson Davis inviting him to join the Confederate Army and become an army doctor. This he would not do, but he tried to remain in Loudoun County where he treated anyone who needed his services – including Union and Confederate soldiers, and runaway slaves. The word went out that he was a “traitor,” and he was forced to abruptly flee across the river to Maryland, ending up in Harney, near Emmitsburg.  He returned to Lovettsville after the war, and attempted to set up his practice again. He was also a Charter Member of the Freedom Lodge No. 199 of the Masons.  But he found himself still branded a traitor, and returned to Maryland, where he was the “village doctor” in Harney until his death in 1893. He and his wife are buried in Evergreen Cemetery in Gettysburg, as are Luther Slater’s first wife and infant child.

Dr. John J. Henshaw (1812-1894), was born in Berkeley County (now W. Va.) and received his medical education in Philadelphia around 1840. He had a medical practice in Lovettsville before the outbreak of the Civil War. In May 1861, he was designated as Adjutant to the Commander of the local militia regiment, the 56th Virginia. He ran for election as a Unionist to be a Loudoun delegate to the Virginia General Assembly at the time of the May 23, 1861 secession referendum. After the rest of the county voted for secession, he had to flee to Maryland. However, he did return to Loudoun, since we know that he was summoned to care for Lt. Luther Slater after Slater was seriously wounded at the August 1862 fight at the Waterford Baptist Church. Later during the war, Dr. Henshaw was active politically as Treasurer for the Unionist government (the “Restored Government of Virginia”) in 1864, and he was a Loudoun delegate to its constitutional convention. His obituary states that “for a time, he was the only physician in Lovettsville, Va., all others having been driven out by the war.”  In 1866, Dr. Henshaw testified before the Congressional Joint Committee on Reconstruction about post-war conditions in Loudoun County and the deep hostility to Unionists. As a result of his Congressional testimony, he was forced to permanently relocate to Emmitsburg, Maryland where he set up a new medical practice. He was elected to the Maryland House of Delegates in 1885 and was Postmaster in Emmitsburg from 1889 to 1893. He is buried in Thurmont, Maryland.

Dr. Fiske Elgin (1850-1929) was born in Maryland, although his father was born in Aldie in Loudoun County.  The first record of Dr. Elgin paying a medical license fee was in 1889. He and wife Sallie bought the house at 30 East Broad Way in 1891, built the Victorian addition to the brick house in 1893, and lived there until 1901. They moved to St. Louis, Missouri, where Fisk died in 1929, and Sallie in 1943. They are buried in Bellefontaine Cemetery in St. Louis.

Dr. William Barr had a medical practice at 40 East Broad Way for two years in the 1920s or 1930s; little is known about him.

One Reply to “Lovettsville’s Doctors over the Years: Medical Ledgers Added to Museum Collection”