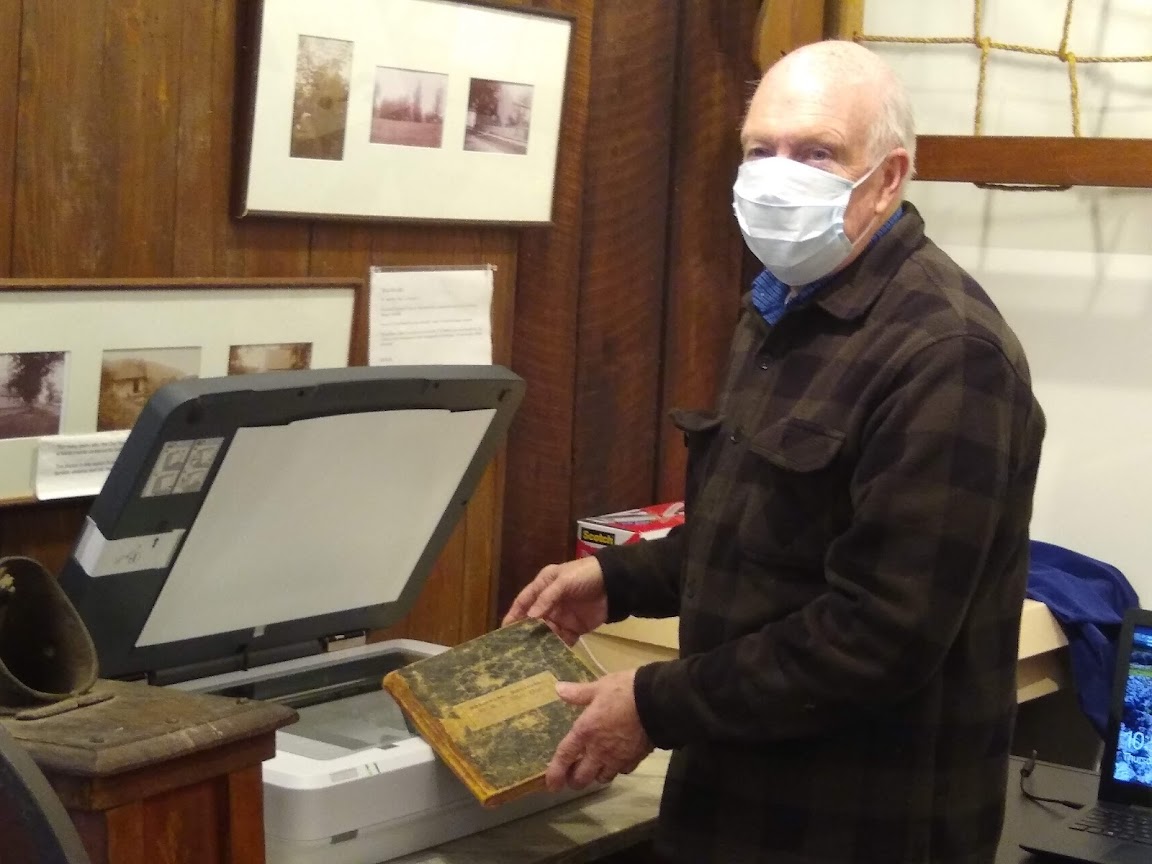 In addition to what we have reported previously about Dr. Willard’s war-time journals, the medical ledgers include the names and accounts of his Lovettsville patients, both “colored” and white. (See below for a listing of his “colored” patients.)

They also contain a listing of the rates charged to patients for various services rendered. Of interest to modern readers are both the rates – including for home visits – and the range of medical services offered, which include setting broken bones, amputations, delivering babies, vaccinations, pulling teeth with or without anesthesia, and so on.

James A. Willard was born on 21 April 1820 in Berlin (Brunswick) Maryland. He earned his Doctor of Medicine in 1843 at the University of Maryland, and practiced medicine and resided with his family in Jefferson, Maryland prior to the Civil War.

During the War he served with the 13th Maryland Infantry Regiment (USA), also known as the Potomac Home Brigade, as a surgeon. At Gettysburg, the PHB was in the thickest of the fighting at Culp’s Hill and was one of the regiments that helped to finally counter General Longstreet’s Confederates. Dr. Willard was one of the 106 doctors at Gettysburg faced with horrible task of treating the 14000 Union and nearly 7000 Confederate wounded soldiers.

The PHB marched with the Army of Potomac in pursuit of the retreating Confederates to the Potomac River, where it resumed guard patrol of the B&O Railroad and the C&O Canal. At the Potomac, Dr. Willard was in charge of the Union Army’s general field hospital at Sandy Hook, Maryland, near Harpers Ferry, until the end of the War.

He reestablished his medical practice in Lovettsville in 1868 where he purchased the house on Pennsylvania Avenue and lived there until his death on 30 July 1907.

Lovettsville Museum Director Michael Zapf has been studying Dr. Willard’s journals which were kept during and after the Civil War, and he is in the process of scanning and digitizing them. Dr. Willard’s journals contain a wealth of information on the administration and operation of the Army field hospital at Harpers Ferry, as well as a broad range of his personal observations and questions about history, religion, slavery, and his experiences and plans after the war.

Dr. Willard’s wartime journal entries begin in November 1864 with meticulous detail of expenditures, supplies on-hand, requisitions of supplies, food provisions as well as the number, names and condition of the sick and wounded soldiers in his charge. The ledger includes verbatim copies of all correspondence sent and received as well as excerpts and thoughts from his reading of history, philosophy, theology, literature and issues of interest. An example of the quality and depth of his thoughts can be found in the words of a copied letter to his cousin, the Reverend George Washington Willard, dated 1 June 1866, in response to his cousin’s remarks on Negro slavery:

“My dear Washington,
…I will ask you if you have ever seen anything enchantingly lovely in slavery as that you could be persuaded to submit yourself to its discipline?

I have known you for twenty years in a region of country where the institution existed and where you saw it in all its forms, but I do not remember at this moment ever to have heard you lament that you were not a slave…

If you mean by freeing the negro simply to release him from compulsory labor and then leave him exposed to all the ferocity and vindictiveness and cruelty of his late master, I say seriously and honestly that I do not think it would better his condition; but if you mean to admit him upon the platform of Equality, and let Congress have the management of him for a little while, I say with the same seriousness and honesty, I do think it would better his condition.”

Letter From James A. Willard to George Washington Willard, 1 june 1866

There are surprising silences in these journals as well. Dr. Willard does not record any personal correspondence with his wife or children, who lived in Jefferson. There are no reports or comments on military operations. He does write in anticipation of the end of the war so that he can be discharged and resume his medical practice as a civilian, but he only notes the end of the war in April 1865 without fanfare, and never records the news of, or his thoughts about, President Lincoln’s assassination.

Following his discharge, he moved with his family to Springfield, Illinois on the advice of his brother-in-law to resume his practice. His record of the period from late 1865 until 1867 is a record of frustration, bitterness, failure, bankruptcy, and morbid despair, as reflected in a letter to his brother-in-law, Phillip, dated 22 June 1867. Dr. Willard refers to himself in the third person:

“Sir,
If from the abysses of wretchedness and misfortune you have never reached, you will listen for one moment to a voice which once perhaps was entitled to some consideration—hearken.

There are those here for whom your heart still feels a brother’s tenderness; and others who for a dear sister’s sake will move your softest sympathies; these, all have been brought to degradation, want, temporal ruin by what some esteem the perverse folly and persistent wickedness of the man, who owns himself their natural protection. From this state of abject suffering, he can see no possible method of extraction or hope of better things to come. For himself he has nothing to say, nothing to ask, nothing to expect of Christian charity…let him pass.

For those whom he must not be thought even most remotely deserved to repudiate as wife and children, although an adverse may place between them a bar of separation, for them who have not erred from the faith you hold and preach, be your bonds of compassion moved, your deeds of love be shown. Help Nannie if you can out of this den of thieves and miscreants to some humble home where she can rear her children in the love of truth, virtue, tenderness, honesty and where in the consistent exercise of her duties…they may shelter, food and raiment fit and sufficient for their daily comfort and their daily need. That is the voice, do you hear it?”

Dr. Willlard recorded his effort to reestablish himself again back East in Maryland and finally in Lovettsville.  He includes verbatim a copy of the deed to the house on Pennsylvania Avenue, letters of advice to his two sons, and includes some of their letters to him.

James Willard’s journals are more than documentation of accounts due and owed, more than inventories of equipment and people, they also encapsulate the character of a man during a time of great national transition in his own words on subjects that were meaningful to him.

Unfortunately, the journals and ledgers in our possession only continue up to 1872. We believe that Dr. Willard continued his practice of medicine for the rest of his life. Dr. Willard died in 1906, and is buried in Union Cemetery, Lovettsville.

The Willard journals are a valuable resource for those researching their family history and the years of transition after the Civil War. The Lovettsville Historical Society hopes to complete the first phase of digitization in 2022, and we will make these important records accessible on our website.

For more on Dr. Willard, see our previous articles, here and here.

Excerpts from the Journal

Patients indicated as “colored” in the account ledgers of James A. Willard, MD of Lovettsville Virginia, listed in the year that they appear.

One Reply to “Dr. Willard’s Journals being digitized at Lovettsville Museum”